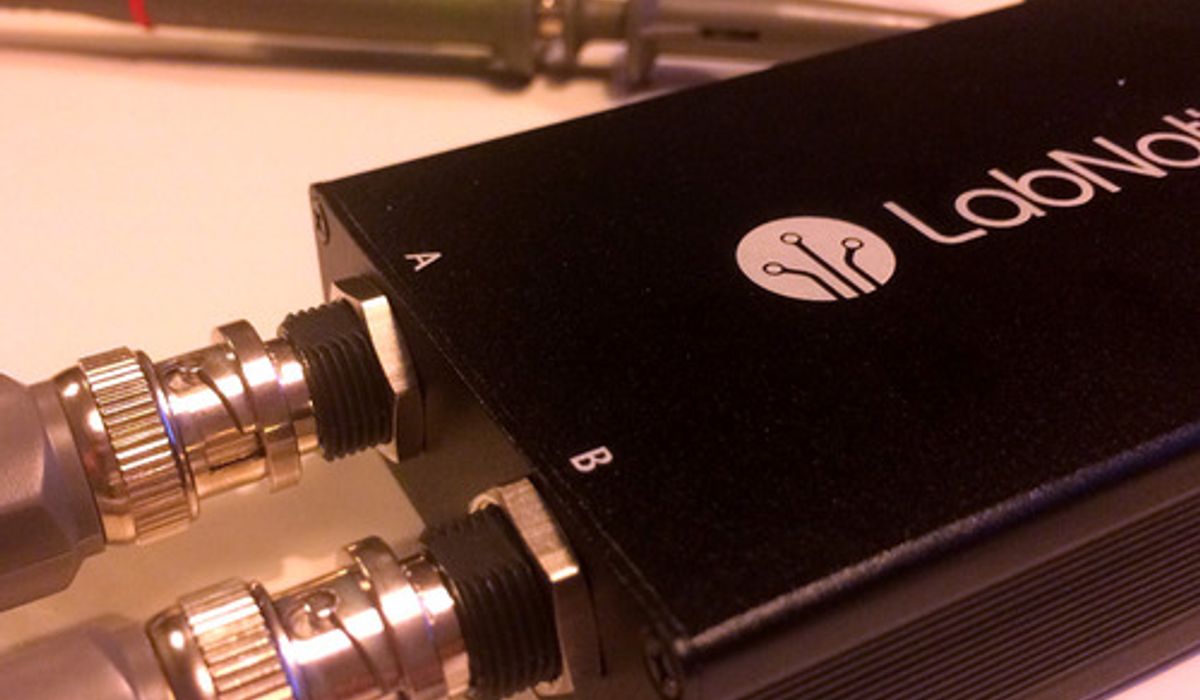 As some of the regular readers might know, I’m a big Kickstarter enthousiast. It doesn’t mean I blindly throw my money at every cool looking project. But I am willing to spend a fair amount of money on something promising. And although most of the time my expectations were met, once a while it simply just doesn’t work out as expected.

A while ago I stumbled upon the SmartScope. Or, as the team behind it, LabNation, likes to describe it:

The world’s first 100MS/s open source oscilloscope for iPad, Android and PC. A must-have for every Arduino and Raspberry Pi developer!

I didn’t yet own a oscilloscope, and although my beloved multimeter helps me out most of the time, this would be an awesome addition to my tech-workspace. Especially since the device itself is fairly small: easy to store when not in use. Granted, the SmartScope wasn’t cheap: $229,- But compared to a regular oscilloscope, it looked like a bargain. I decided to become a backer of the SmartScope Kickstarter Project.

As always, the waiting began. Shopping on KickStarter is fun, but you really need a lot of patience. During the waiting period, I spent many moments on Kickstarter, reading about the new toy I could look forward to. Until I discovered the fine print:

What? Why did I miss that before I became a backer? I do not want to jailbreak my iPhone or my iPad. So there was no way to use it on my touch devices. The SmartScope would only be usable on a desktop machine. This really was a bummer. The touch interface would be extremely useful. As well as the fact that I could use the iPad for electronical debugging while I use my Mac for programming.

Nevertheless, the SmartScope still had it’s benefits: a small form factor, and a easy to use interface. So I decided to stand behind my decision to be a Kickstarter backer.

The production took nearly 8 months. Twice as long as they initially predicted. But let me clear on that: I rather receive a well produced piece of technology, in stead of a rush-job that results in a poor functioning proof of concept product.

Last week I finally received my SmartScope. Boy, did I look forward to this moment! It was hard to explain to my girlfriend what I was so excited about, but I was sure that I could explain it to her, as soon as I got it up and running.

The end of the excitement

Unfortunately, that is where all the excitement stops. After installing the SmartScope software. It became clear: in no way was this software ever developed to be a full fledged desktop application. It was merely a poorly thought thru copy of the iOS app with missing gesture support. The application misses any form of thought thru user interface. Crashes on any keypress, doesn’t respond to scroll gestures and fails on any common use-cases (like rescaling the window).

I soon discovered that I wasn’t the only user running into these problems. As more users voiced their displeasure on LabNation’s forum.

Now, this brings me to the point of this blogpost: What are the responsibilities of a backer on Kickstarter? Should we see ourselves as the QA-team? Are these the risks we take when we want to use bleeding edge technology? Or are we just everyday customers with the same rights, like buyer’s remorse?

Let me be clear: I do understand new project like these can have their start-up problems. But does that mean I should have another few months of patience before my $229,- piece of dust collecting metal becomes somewhat usable?

On one hand, I want to help LabNation finding the issues that cause all these bugs. But on the other hand, I think there is a big difference between minor start-up issues and straight out delivering a non-finished product.

What do you think?