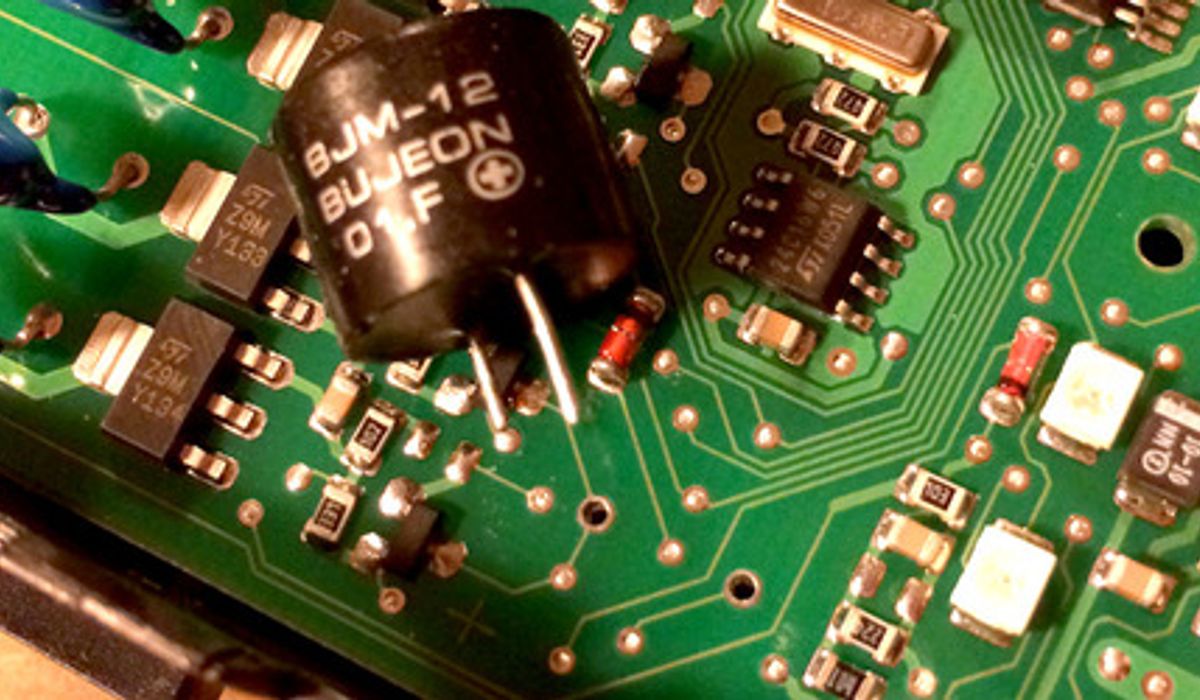 The Annoying Dishwasher - The Sequel

So, you remember the story of The Annoying Dishwasher™? Well, yesterday I defeated him. With the use of some specialized weapons, I removed the Vocal Cords of Hell, silencing the dishwasher for ever.

Of course this had one minor drawback: from now on I was unable to tell if the dishwasher was ready for a new load of dirty dishes. The evening’s goal was defined: connect my own notification system.

The first idea (as discussed in previous post), was to connect a 12 volt relay on the buzzer’s original connections. The only drawback would be that the relay would pulse 2 times every 15 minutes. Preferable the relay would stay on, until I powered off the dishwasher. But to do this, I needed an extra power supply on the relay. To separate this supply from the dishwasher’s computer, the idea was to use an optocoupler.

Optocoupler An optocoupler is a component that transfers electrical signals between two isolated circuits by using light. A common type of opto-isolator consists of an LED and a phototransistor in the same opaque package.

Now, before I tried one of both solutions, it seemed like a good idea to test the original buzzer on 5v increasing to 12v, to guess what voltage was used by the dishwasher.

It turned out I completely missed the fact that the buzzer only beeps if it receives a square wave signal, generating the ±3000hz beep. This was clearly stated in the datasheet, but overseen in my enthusiasm.

Connecting the relay to the buzzer’s connections (with or without optocoupler), would result in a pulsing relay. It might work, and I may even be able to remove the pulse by using a big capacitor, but it seemed like a shady solution.

I discussed the issue with one of my friends, Gijs, who knows a hell of a lot more about electronics than me, and after discussing all technical details we figured it was time to step outside of the box.

What about completely ignoring the buzzer’s connections, and focus on on the _Ready-_indicator LED? If I connect the optocoupler in paralel with the LED, the optocoupler should be triggered as soon as the Ready LED is turned on.

Time for some soldering! I connected two wires parallel to the LED to break out of the dishwasher’s housing. With the small SMD less this was a tricky but fun challenge, but I managed to do it.

The LED is turned on as soon I power on the dishwasher, turned off as soon as I choose the right washing program. And turned back on as soon as the program is finished. Of course this wasn’t exactly the desired behavior (resulting in a “Ready notification” as soon as I turn the machine on), but for testing purposes it is very convenient: I did not have to wait for 15 minutes before the short program finishes.

I connected my new multimeter (Thanks for the perfect birthday present, Jaap!) to the wires and powered on the dishwasher …

… 0.8v. Nowhere near the required voltage for my 4N35 optocoupler (which has a typical 6v operating voltage, but works perfect on 2v). So for now, connecting the Optocoupler was a no-go.

Google taught me that a 4N30 optocoupler has a lower operating voltage. But since I did not have one at the moment, I temporarily connected a 3MM LED to the wires, so for the time being, I would be able to tell if the dishwasher was ready.

Time for a test-drive. I created some dirty dishes (hey, everything is a good reason for some late night snacks!), and fired up the program which should take 15 minutes. 20 minutes later the LED was still off …

I opened the dishwasher to check the original _Ready-_LED and immediately my self connected led turned on. It struck me: the LEDs only work when the dishwasher is open.

Back to the drawing board. Luckily I managed to solve it: Don’t miss next week’s blog!