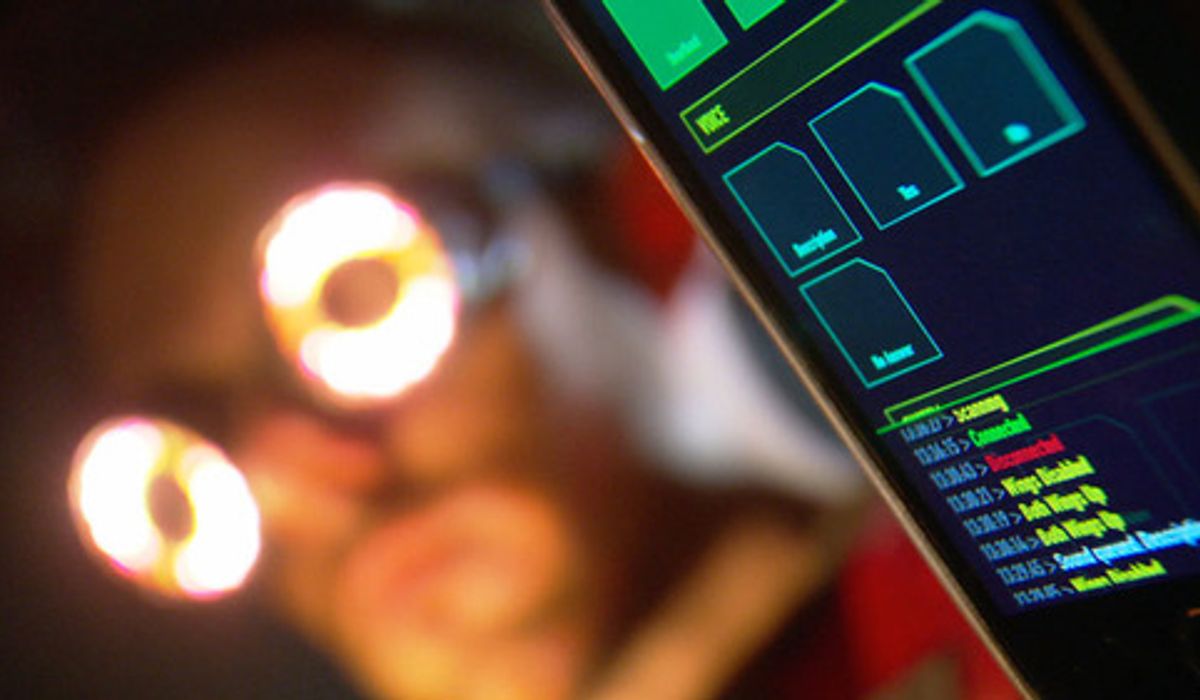 Available on an iPhone near you.

After I programmed the built in Arduino, the only thing left to do, is the development of the associated iPhone Application. This week I’ll be writing the app to control the sounds.

Besides a futuristic designed interface, the iPhone app has 5 features:

Since I love to experiment with Apple’s new programming language Swift, I figured this would be a great project to try it out. If Swift is the future, it fits the Future Power Suit. ;)

The interface consists of a scrollable collection view with multiple sections:

Every section contains multiple cell with each their own action. In most cases this action is triggering a sound effect. In some cases (for example with the loops) it toggles the sound. In this case the cell changes it’s color to represent the current state of the sound. Additionally, some of the sections have a toggle to enable and disable the randomized playback of the sounds.

Besides the collection view, there is an UITextView to function as a console. The editing and selection of the text is disabled. And console messages are added by prepending NSAttributedStrings.

To play sound, I created a SoundPlayer class. For every type of sound I create one instance of this sound player:

In case of the voice effects I don’t want to overlap the sounds. Before the next effect is played, the previous sound effect must be finished. This is done by the SoundPlayer’s .queueSound() method:

For the background loops I use the .loopSound() method:

And for all other sound, I just trigger a simple .playSound() method:

Additionally, the SoundPlayer instances have some extra methods to fire a random sound, clearing the sound queue or stopping all current playing sounds. Overall, this SoundPlayer is a convenient wrapper around the AVFoundation framework.

Some of the sounds the App can play, are not triggered by user input, but are triggered by strings of text. These strings are send by the Bluetooth module on the onboard computer.

For example, if the App receives the string WINGS_ENABLED the sound effect voice_wings_enabled.wav is played. Additionally a yellow message is logged to the console screen.

But before this can be done, it’s necessary to setup the Bluetooth connection to the nRF8001-Shield. Because of this, I developed my own nRF8001-Swift module. More about this, can be found in my blogpost about the NRFManager.

Eventually, the triggering of the sound by bluetooth commands is as simple as the following code:

Most of the sounds are sounds I’ve found on freesound.org or bought on AudioJungle. Especially Audiojungle turned out to be a great source of perfect audio effects for a reasonable price.

In some cases Adobe audition helped to give them some extra futuristic touch.

The voice effects are made by using my Mac’s text-to-speech function. After installing Ava’s voice via System Preferences > Dictation & Speech, the sounds can be easily generated via the terminal:

The -v ava argument selects the voice it uses. The -o wings.aiff part makes sure the voice effect is saved to disk as an AIFF file.

Afterwards Adobe Audition is used to add some reverb and additional sound effects tot the voiceover.

Check out the following sound examples:

Check out the code

Once again, the source code of this app is available via GitHub. But with some minor warnings:

Any suggestions for cool sound effects or voice messages? Leave a comment down below!