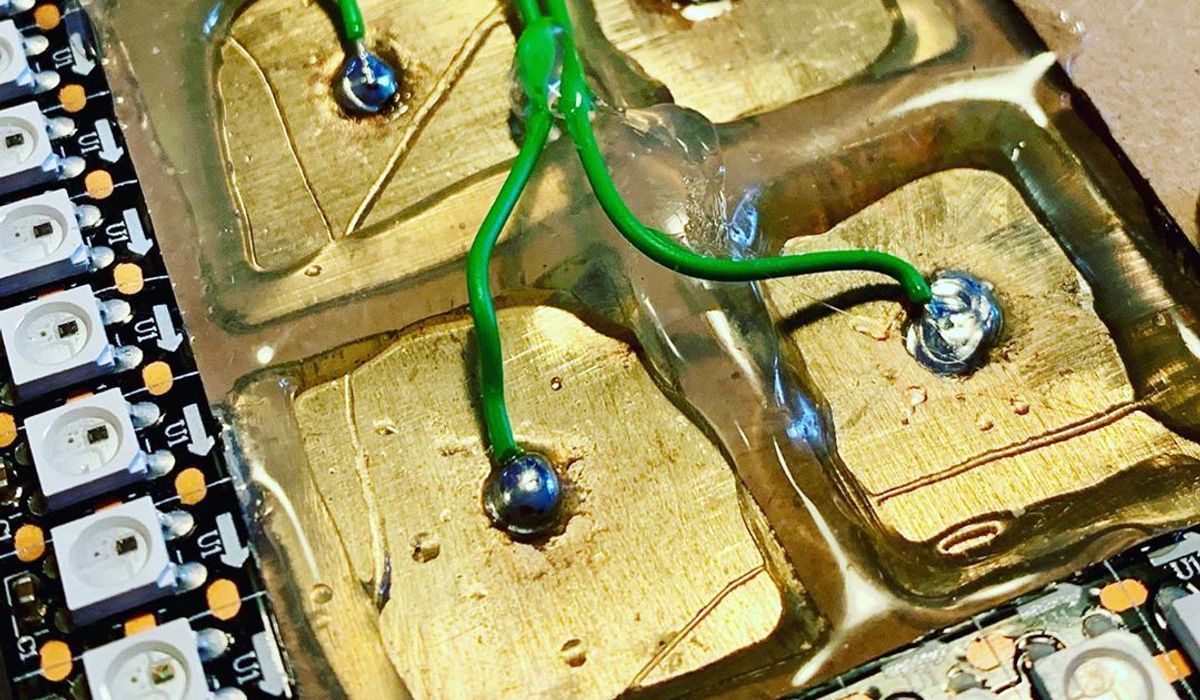 It’s been a few months since I’ve finished my MusiCubes Controller. And although most of the controller works perfect, there is one issue that is still bugging me: the false positives of the touch sensors. Time to fix this!

Originally I tried to solve this issue by taking some counter measures in the software:

And although this solved most of the false positives, it still wasn’t perfect. Mainly the volume down button was triggered every once in a while, resulting in a mute state after a few hours of playing. Also the fact that I couldn’t turn the volume all the way down before starting the music was a minor inconvenience as well. A modified touch system should solve this.

I originally added one plate of brass on each side of the the MusiCubes tray to handle the touches on the designated surface. The plates of brass were 40x30 mm, allowing me to touch the designates surface anywhere I wanted.

The idea is to split up the touch surfaces in 4 sections each. Since I am using the MPR121 Proximity Capacitive Touch Sensor Controller which has 12 touch sensing inputs, connecting these four sections doesn’t require any extra electronics.

Whenever the MPR121 reports a touch, I’ll count the number of active touch surfaces. By setting a threshold of a minimum of 2 surfaces, false positives on one of the touch surfaces will be ignored.

I had used some hot glue to mount the brass plates to the MDF. A small screwdriver and a bit of force aloud me to pry of the glue and remove the plates. Removing the glue from the plates and cleaning them up was very a satisfying job.

Cutting the pieces of brass up into four sections was an easy job for my Dremel multitool, so soon enough I ended up with 8 small brass plates.

Next I connected four pieces on both sides to their respective MPR121 sensors. Note to self: next time solder the wires to the plates before glueing them in place, because the soldering heat melts the glue.

And with this modification done, it’s time to modify the code.

To quickly count the number of active fields, I added a method to my TouchManager:

If the number of active fields is above the threshold, I handle the touch like I did in the previous version. For the full modification of the code, check out this commit on GitHub.

Because of this, I didn’t need a threshold of 2 touched surfaces. In stead I can just respond to any touch detection. And because there aren’t any false positives anymore, I can enable the tough controls even when there isn’t any music playing.

Turn Down The Heat

And with the touch changes, the hardware of the MusiCubes is almost perfect. Almost. Unfortunately there still was one minor issue. The system is powered with a Micro USB power supply, directly into the NodeMCU USB connection. This means that the Neopixels are powered over the same connection.

Unfortunately the USB power goes trough a diode on the NodeMCU board, to prevent any power going into the USB port. But this means the 1 amps that are necessary for the NeoPixels flow through that diode as well. It works, but the diode gets hot. Too hot.

To fix this, I added an external USB connector that directly feeds the 5V into the Neopixel power lines, as well as the the NodeMCU. The tiny diode no longer has to deal with the power hungry LEDs.

And with this change, all of the issues are solved!

The MusiCubes controller really turned out to be a perfect companion to my Sonos sound system. Starting and stopping the music is so simple that even my 3 year old son casually controls the music from time to time. It took a while to convince him to play something else then Disney’s Moana music though …