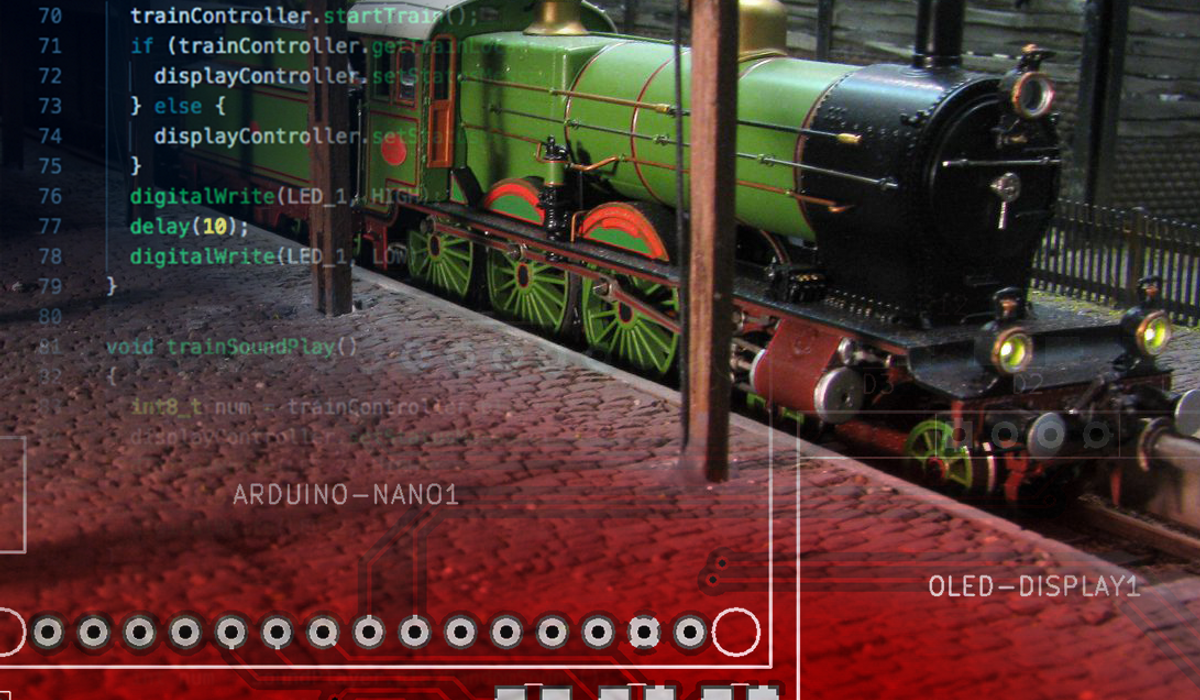 This post is part of the Train Automator series. Check out the other posts here:

As my regular readers know, my dad is an avid Model Train hobbist. And altough my interest is more on the digital side of electronics, every now and then our hobbies meet. After my recent Arduino powered analog clock project, I once again will work on a project for my dad: Let’s make his trains Arduino powered!

In the past years, my dad’s train artworks were featured during the OnTrax Train Expo in the dutch Railway museum. The photo above (which show my dad and my oldest son Enzo) is made during the most recent expo and features the train controller I built last year. During the next Expo, my dad will show his new creation with a shuttle train.

Like most of his tracks (with exception of the track in the previous picture) the shuttle train will be controlled using a Roco MultiMAUS and although this allows for very easy control, this would mean he needs to continuously operate the train during the expo weekends. Of course there are many automated solutions to solve this. Unfortunately most of them are pretty expensive, complicated and would require my dad to connect a full blown computer to the track.

As an enthaustic microcontroller fanboy, I’m sure I can come up with a simpler solution that allows him to automate his shuttle train.

To check if I was on the right track (pun intended), I hooked up my Rigol DS1054Z oscilloscope to see if I indeed receive some data …

And after some fiddling around and swapping the A & B channels on the bottom of the MAX485 breakout board, I the bits started to appear on my oscilloscope. Great!

Of course, I wasn’t the first person to start this adventure. As a matter of fact, I couldn’t have done it without the help of Philip Gahtow who wrote the awesome XpressNet library. This library also included the image above which shows the wiring needed for this project.

Since I’ll be using an Arduino Nano which only has one Serial port, there was one caveat: I couldn’t flash the Arduino while it was connected to the RS485 bus. But with that in mind, wiring everything up was pretty straight forward.

Of course, the system also needs a way to detect if the train approaches the end of the track. And although there are many (complicated) ways to achieve this, I will go for the easiest solution possible: adding a magnet below the train, and putting two reed contacts between the tracks. For now (since we are prototyping) I just manually control the end stops by connecting the yellow wire to one of the two assigned end stop pins of the Arduino.

And with the electronics all wired up, it’s time to start working on some proof of concept code. I must admit it’s a pretty unique place to do some coding: right between the tracks.

Let’s see if we can start the trains.

First, we need to set up the basics:

Next, we need to configure the XpressNet object, and finally we can give the train the command to start driving. In this prototyping phase, let’s keep it simple, and put it all in the setup() routine, so this command will be only be given once.

Note that It said the command is queued. It won’t be send to the train directly, since the XpressNet library will wait for data from the digital amplifier first. This is something that took me a while to find out, but luckily, the solution is very simple. We need to call XpressNet.receive(). in the main run loop:

And low and behold, after uploading the code and connecting the MAX485 unit to the digital amplifier, the train starts moving!

A few caveats I ran into:

And with that in mind, we can start working on the read deal.

Of course my dad likes to give me a nice challenge. So not only are we going to control the train’s movement. We are going to add the following as well:

Of course, I can’t just hand over a breadboard contraption, so in the next post we are going to work on a custom designed PCB that houses all the necessary electronics. Read it here!