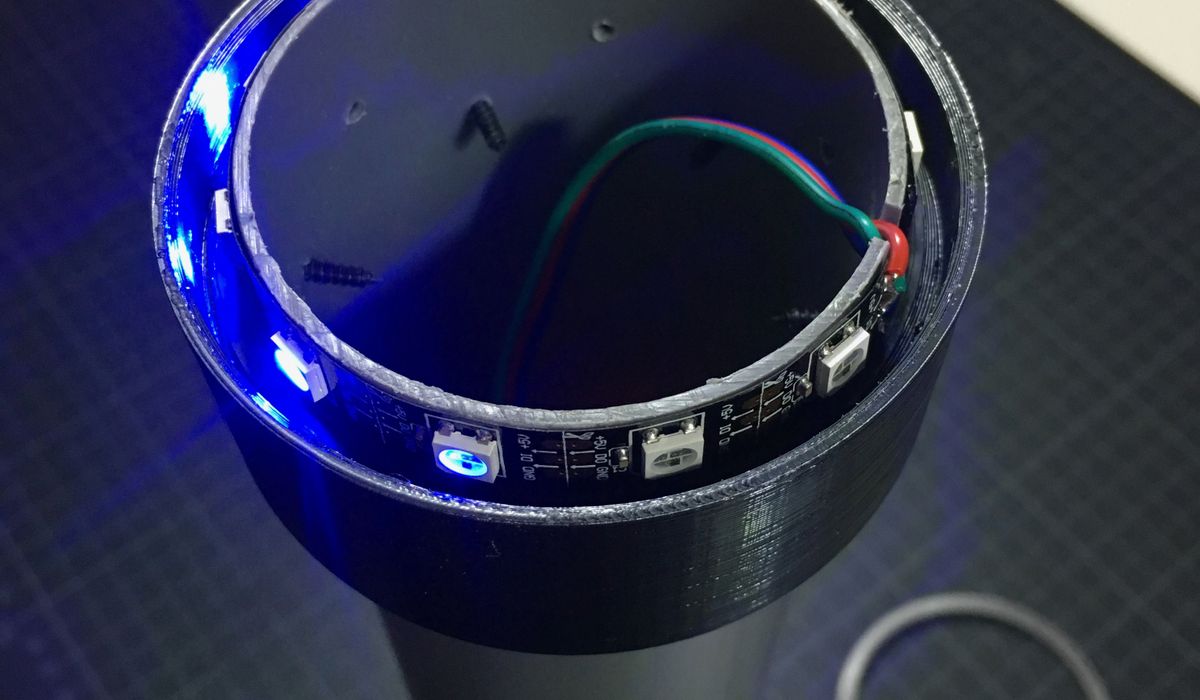 2 weeks ago I wrote about my new project: building my own DUM-E robot. And while I have a lot of idea’s for this project, I mainly spent my time waiting for the nessecery parts to arrive. So to ease the waiting, let’s work on making the passive side of the joint a little more sexy.

I wanted to redesign the passive part I’d done so far anyway. Since I would working on it, I figured I could make it a bit more sexy … Led lights, and specifically Neopixels make everything look futuristic. So the idea was born to add an ilumiated ring to the 3D printed section of the joint.

As you can see in the desing above, the bottom of the joint will be a threaded sleve that gives me enough room to add both the neopixels and a translucent ring. The translucent ring (the red part in the image above) will partly fit inside the outer sleeve which will improve the diffusion of the light.

The inner thread is fixed to the PVC pipe using small screws. The screws will also hold the main parts of the joint in place, so as you might understand, I needed to remove those screws again when fitting all the other parts. For the light effects, I used a small part of a Neopixel strip containing 11 leds. A 2 dollar Arduino clone is currently used for testing.

Using a few drops of super glue, I mounted the Neopixel strip to the PVC pipe. When the outer sleve is screwed in place, there is exactly enough room for the diffuser to go in between.

Now, onto the main parts of the joint. With 6 hours of printing, this is probably my longest print so far. The parts are printed using FormFutura’s HDGlass™. After FormFutura heard about my robot arm project, they sent me a few spools to test it out. I must say I’m impressed so far. As most PETG filaments, it’s strong, forgiving, odor free and has a nice glossy look. They are not paying me to say this, I just really like the results …

With the help of my vice and a metal file, I made the 8mm rod that will function as the main axis of the joint.

So with all the pieces of this side of the joint ready, it’s time for the assembly and see if the light idea works out as expected.

And yes, it does! Even though the joint isn’t capable of any mechanical movement yet, the ilumiated ring sure makes a nice impression! And to make it even better, I ordered some 144 led’s per meter Neopixel strip. Allowing me to double the number of leds inside this joint … Sweet!