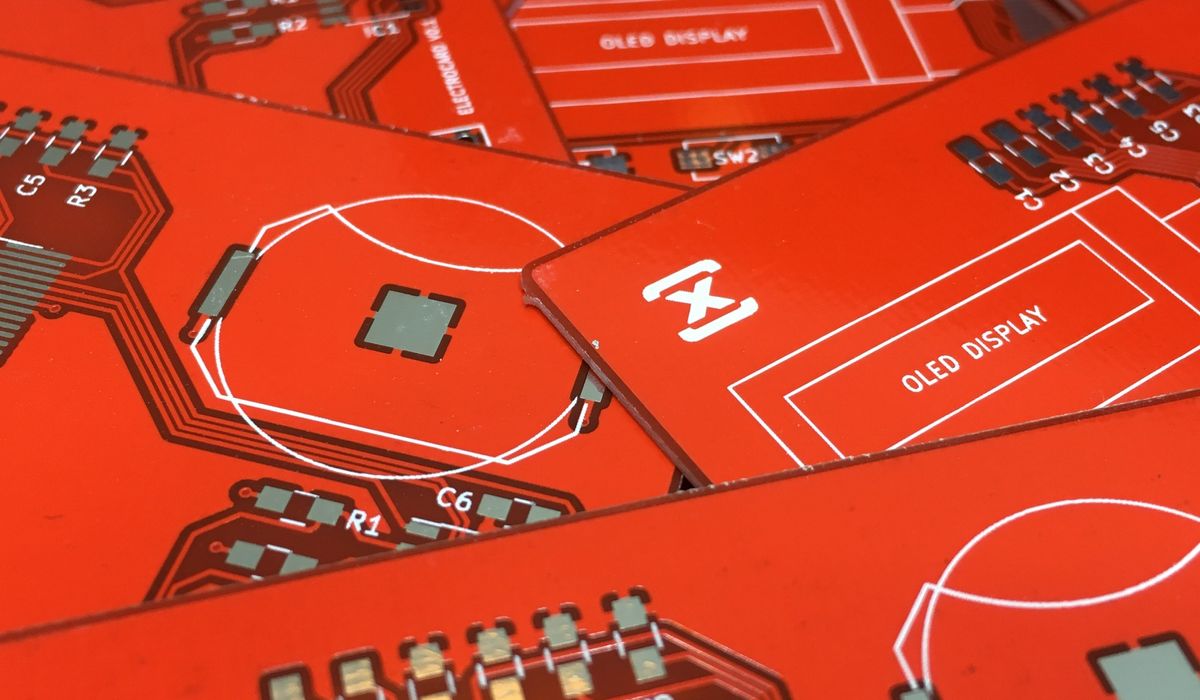 Ever since I have my own company I wanted to have a PCB business card. Of course I wouldn’t be the first, but it would definitely give a nice touch to my company’s identity. And since I wanted to give KiCad a good try anyway, why not go for it?

Of course it’s fun to just make a fake pcb layout, but it would be even better if an assembled version of my business card really had some nice features. Since I managed to get a bare SSD1306 OLED working, there wasn’t any excuse to not accommodate the business card with an OLED display.

Based on the schematics I worked out to control the OLED, the schematics for this ELECTROCARD are pretty straight forward. The OLED requires 8 passive components, and will be controlled by an ATTiny85 which also needs one capacitor. To interact with the business card I’ll add 3 SMD push buttons. The board will be powered by a CR2032 coin cell. Since I’ll be using the low power sleep mode when the card is not in use, the card won’t need a real on/off switch.

With the schematics worked out, I started designing the PCB. Since the card is 85mm x 55mm I have more than enough room for all the components. Of course, I did put some effort in the visual aspect of the PCB layout. This step took a lot of time, since there’s alway something to improve. Luckily KiCad’s Push and Shove functionality makes it a breeze to make any modifications.

With the help of KiCad’s 3D render function I could get a good idea of the final result. So after a few days of tweaking, playing and checking the footprints based on a paper printed version, It was time to order the first version of the PCB. Of course I used red PCB’s since this is my company color.

Since I wanted the bare PCB’s to be cheap I checked some Chinese PCB production facilities and ended up going for Elecrow. When ordering 50 boards, they would cost me €1,- per board (€6,- per board including components from AliExpress). A perfect price for a premium business card. Normaly you would only order a small batch for testing first, but since I can use unassembled (and faulty) PCB’s as my business cards I decided to order 50. Elecrow really did a great job here. Fast delivery. High Quality and perfect communication. If you’re looking for cheap PCB’s, I can really recommend these guys.

Of course no project can ever go without any set back. While I was waiting for my PCB’s to arrive, I received the ATTiny 85’s. And lo and behold, they didn’t fit the SOIC footprint I used. Stupid me used an ATTiny84 to check the width of the footprint …

It turned out there are two different package standards. The EIAJ SOIC body is approximately 5.3mm wide, while the JEDEC SOIC body is approximately 3.8mm wide. Make sure to check your parts before ordering your PCBs … Luckily it isn’t a big deal, since I could simply bend the pins of the ATTiny85 and make them fit. None the less: the next batch will have a fixed footprint.

The end result of the PCB really looks more beautiful than I could have hoped. The red soldering mask really pops, and the 0.8mm PCB’s are the perfect size to be used as a real business card. On the back I used coper traces to imprint my company’s name. Remember that name, it might be the company you need for you future innovation projects. ;)

Next time I’ll be showing the hand soldering of one of the cards … Keep an eye on my blog to make sure you don’t miss it. :)

Psssttt … wondering what happened to my activity board project? I’m still working on it, but had some issues with sourcing the materials I need. No worries, I’ll write an update soon!